NASA at the 2018 National Science and Technology Week

The DOST, through its International Cooperation Unit, is proud to bring NASA to celebrate with us the National Science and Technology Week (NSTW). After long threads of emails and Skype conversations to prepare for the event, NASA finally landed in Manila on July 13, 2018. They were scheduled to be here during the entire NSTW from July 17-21. The National Aeronautics and Space Administration or NASA is an independent agency of the US federal government responsible for the civilian space program, aeronautics and aerospace research. Guided by the vision “We reach for new heights and reveal the unknown for the benefit of humankind,” some of NASA’s feat include the moon landing mission, numerous space explorations, and the earth observing system.

NASA was invited by THE DOST-NSTW because we have a joint project with them called the Cloud, Aerosol, and Monsoon Process Philippines Experiment or CAMPEX for short. This project is co-implemented by the Manila Observatory and the weather bureau PAGASA. It’s a scientific exploration that will collect atmospheric data, mostly the colloidal particles in the air, and correlate it with meteorological events such as cloud formation and weather patterns. This is an important endeavor, especially nowadays with climate change happening, because it will reveal how much of our human activities contribute to the said phenomenon.

Their participation at the NSTW is a good platform to inform a wider audience about the project benefits. We say in our theme, “Science for the People” so this is really about letting the people know what’s happening, what’s the science of the atmosphere telling us, and how science can guide our actions in terms of creating a more sustainable environment, whether individually or collectively.

Apart from the information about the CAMPEX project, NASA has also set up interactive demos and movie clips for the audience to be introduced to their latest earth and space missions. Dr. Graham gives lectures to students on earth science by showing them the most updated data coming from the satellites. After the lectures, students and visitors were handed with a NASA gift bag containing NASA pins, pamphlets and stickers. The volunteers from the University of Arizona were also all smiles in talking to booth visitors and responding to any questions they might have.

Through this, students and visitors become informed of the latest happenings not just about the CAMPEX benefits, but also about other works being done by NASA. More importantly, because of the personal interaction with the NASA experts, it becomes a platform to inspire students to pursue STEM (Science, Technology, Engineering, Mathematics) courses. Ms. Tan is also a resource speaker in the forum organized by DOST on July 20, entitled “The Philippines Crossing the Atmospheric Borders.” This forum will explore different space technology applications and opportunities.

The NASA booth is obviously one of the most popular exhibits in the whole NSTW. On the first day on Jul 17, about 700 NASA bags were handed out, showing the massive flow of traffic in the day. Students were happy that they can personally talk to Dr. Steve, Dr. Hal, Armin, Rachel, Alexander, and Connor. Meanwhile, Filipino professors and experts in the field who visited the booth found it very enlightening to discuss some project details with Ms. Florence and Dr. Hal. Through this networking, a platform is opened to connect our own experts and foreign experts, which may very likely lead to future collaborations. 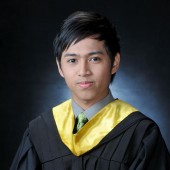 I am the creator and administrator of Noon Break Balita website.