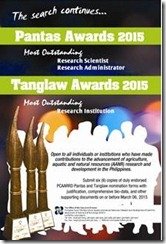 Los Baños, Laguna — The search is on for the next Pantas and Tanglaw awardees. Nominations for the said awards can be forwarded to PCAARRD starting February 3, 2015.

The Pantas seeks for outstanding scientists/researchers and research administrators, while the Tanglaw looks for laudable research institutions.

Scientists/researchers, research administrators and institutions that have made exemplary contributions for the advancement of agriculture, aquatic and natural resources in the Philippines are welcome to submit their entries.

Interested parties should submit six copies of the duly endorsed Pantas/Tanglaw Awards nomination forms with justification, comprehensive biodata, and other supporting documents to the Office of the Executive Director, PCAARRD, Los Baños, Laguna not later than March 6, 2015. Nomination forms are available at the office of PCAARRD and can also be downloaded from www.pcaarrd.dost.gov.ph.