Students and teachers from a school in Isabela pose for a photo after their fun science session inside the Science Explorer. The mobile learning facility is set to take its first visit in Mindanao this February 2017.

For the first time in its six-year existence, the Science Explorer is landing in Mindanao.

The Science Explorer, the Philippine’s first and only mobile learning science facility, will be bringing a unique science experience to the elementary and high school students of the newly formed province of Davao Occidental on February 20-24, 2017.

Repurposed from the Mobile IT Classroom in the early 2000s, the Science Explorer is a bus converted into a classroom, which brings to students from underprivileged municipalities in the country fun and exciting science learning through interactive and hands on activities facilitated by young scientists and researchers from the industry and academe.

Spearheaded by the Department of Science and Technology – Science Education Institute, the Science Explorer has touched the lives of more than 15, 000 students in eight regions in the country.

For its Mindanao leg, it will be serving the students of Jose Abad Santos, Don Marcelino, Sta. Maria, and Malita, Davao Occidental’s capital.

Students are bound to experience learning about mangroves; earthquakes, tsunamis, and storm surge; weather science; marine micropaleontology; astronomy; fun mathematics; and the scientific method, which will be facilitated by experts from the University of the Philippines – Diliman.

DOST-SEI Director Josette T. Biyo said that the Science Explorer’s venture to Davao Occidental is the first step of the project to reach out further into the south.

“We were successful in our first attempt last year to go further south as we brought love for science to the students of Samar and Leyte.  We are hoping that we could bring the same experience to our participants in Mindanao,” she said.(DOST-STII) Science Explorers takes their chemistry experiment outside the mobile facility. 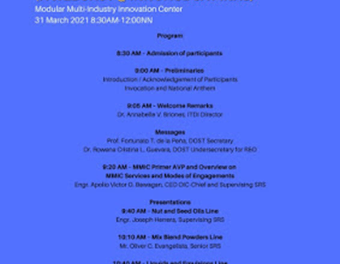