by: Patrick Raymund A. Lesaca

Okra, (Hibiscus esculentus) also known as lady’s finger, is an important vegetable crop in the country. Its demand is increasing mainly due to food and medicinal uses, and non-food essentials.

Beside the local market, okra is grown as a fresh and frozen export product to Japan.  And for the last twenty years, the okra intended for the Japanese market is roughly grown in a 200-hectare farmland in the province of Tarlac. The export market has significantly contributed to the economy of the province.

The production of okra must be addressed to continually meet the local and export demands.

However, one impediment that is affecting its production is leafhopper (Amarasca biguttula) and other associated pests including Spodoptera litura. The pest can cause heavy damage to the crop, and if left unattended, can reach 100 percent loss.

Countermeasures against A. biguttula have been employed by the farmers. Synthetic pesticides are widely used for the control of leafhopper and other insect pests. Application of pesticides is often the most effective management against pest and diseases commonly practiced by the farmers. However, resurgence and detected resistance to leafhopper became a problem caused by chemical calendar spraying practiced by farmer-growers. Likewise, the alarming increase of toxic chemicals used to manage pest and diseases on farms, animals, and plants has endangered the environment and reduced biodiversity as well as the health of the consumers.

Threat to okra production and its remedy

To address the situation, the Bureau of Agricultural Research (BAR) funded and supported a research project, “Pest Management Strategies Development for Organic Okra Production in the Province of Tarlac for Local and Export Demand” implemented by the Tarlac Agricultural University (TAU).

The project aimed to promote pest management strategies and develop an organic protocol to produce organically-grown okra in the province.

The pesticidal properties of many plants have been known for and have been commonly used in pest control. According to Jo-Anne Lynne Joy E. Duque, project leader, an organic Integrated Pest Management (IPM) protocol should be developed for the production of organically-grown okra, or chemical-residue free, as a quality assurance for local and export demand. Dr. Manuelo Agsaoay (former project leader) advocated the bright prospect in the use of biopesticides as an important alternative to synthetic chemicals.

Based on numerous research studies, there are more than 2,000 plant species which claimed to possess pesticidal activities. Among the identified plant extracts which can be formulated as biopesticides were: sambong (Blumea balsamifera), Ageratum weed, and pummelo (citrus) leaves.

Ms. Duque said that part of the research experiment is blending and purifying the selected bioactive plant extracts. Once blended and purified, the extracts will be processed into a wettable powder (WP) formulation for the farmers’ use. The formulated product will then be evaluated for field efficiency trials (on-farm) of the grower-exporters of okra in the province.

Various efficacy trials using the pummelo and sambong WP leaf extracts were done by determining its effects on the insect pests under laboratory and field trials.

Based on bioassay trials conducted against leafhopper, the formulated pummelo WP showed the highest mortality against leafhopper with the application of 60 grams per liter. In field conditions, the formulation was found effective, and is indeed a potential biopesticide. The results confirmed the findings that pummelo extract is toxic to leafhopper, hence causing a high reduction population. The product persists at 3-6 days after application in the field, further increasing its effectivity against leafhoppers. Likewise, the sambong WP exhibited positive response in terms of mortality of S. litura (common cutworm), with mortality ranges from 40 to 60 percent. The team of Ms. Duque will still replicate the experiments to make it more conclusive.

Part of the organic protocol developed by the project proponent was the production of the Control Decision Guide Strategies, which will be demonstrated to farmer-growers and other stakeholders.  The protocol will serve as a guide to okra farmers, both for local and exports, not only for the province of Tarlac, but for the rest of the okra growers in the country as well. 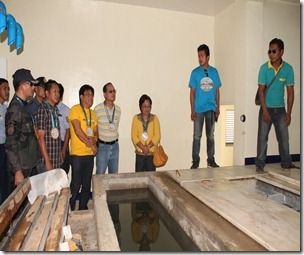