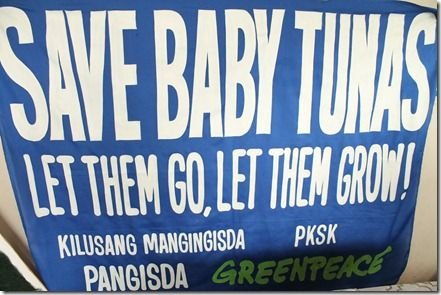 Manila Philippines, 2 December 2014 – Greenpeace today released the results of an investigation into juvenile bycatch, showing evidence that ‘baby’ skipjack, yellowfin and bigeye tuna are unloaded regularly at the General Santos fish port. The investigation was carried out in the lead up to the annual meeting of tuna stakeholders at the 11th Western and Central Pacific Commission (WCPFC) meeting, currently being held in Apia, Samoa.

Greenpeace compiled evidence that confirmed juvenile ‘baby’ yellowfin and bigeye tuna are being traded at substantially less than the average size at maturity of 1 meter in length, and even below the weight limit of 500g, set by Fisheries Administrative Order (FAO) 226, which allows the catching and trading of juvenile tunas as small as 500 grams in weight or just tens of centimeters long [1]. Bigeye and yellowfin tuna are considered mature and able to reproduce when they are about a meter long.

A few months ago, the WCPFC Scientific Committee released information that the current population of the Pacific bluefin tuna is now estimated to be only at 4.2%, and bigeye tuna at 16% of its original spawning biomass [2].

“The world’s tuna stocks are in decline and nothing is being done to stop the catching of baby tunas – which are vital in keeping the fisheries alive. This is a direct result of the continued expansion of fishing fleets, and increasing fishing capacity and effort especially through the use of fish aggregating devices, or FADs, by purse seine vessels,” said Mark Dia, Regional Oceans Campaigner for Greenpeace Southeast Asia, and an observer at the WCPFC. “Despite the red alert on bigeye tuna, fishing companies continue to fish them like there’s no tomorrow. It is time for the WCPFC to tackle unchecked overfishing and demand that member countries like the Philippines take proactive measures to arrest this alarming decline in the stocks. Failure to do so only relegates the WCPFC to an expensive talk shop,” added Dia.

Fish aggregating devices, locally known as payaos, are fishing devices that continuously attract fish and other ecologically related species. When used together with purse seine nets, the catches can be as high as 100% juvenile tuna [3], together with endangered turtles and sharks [4].

Although the WCPFC has already imposed a four-month FAD ban in the high seas, Greenpeace said this is not enough. Backed by strong scientific evidence, the environmental group said any use of FADs by purse seine fleets is simply unacceptable.

Philippine fishing communities are also in favor of banning the use of purse seine on FADs. Small scale fishers who use selective or low impact fishing gear argue that they simply cannot compete with commercial fishing fleets that regularly use FADs which end up depleting fishing grounds, adding to local fishers’ woes.

“There are no more fish left for us to catch, even within our municipal waters. These purse seiners with their FADs rob us of our fish catch and take away everything, including baby fishes,” said Pablo Rosales, National Chairperson of Pangisda Pilipinas. “What’s worse is that our own Philippine government has a promotion policy on FADs. If nothing is done to stop FAD use with unsustainable fishing gear, then we will be fished out of existence.” 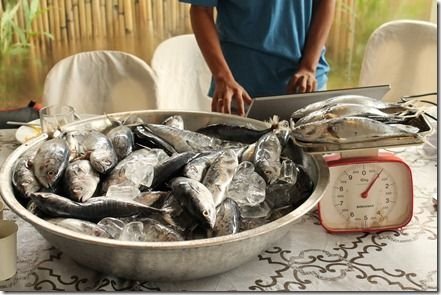 “Six years after issuance of Fisheries Administrative Order 226 to protect tuna, and in the light of amendments to the Fisheries Code, it is time for the Philippine government to strengthen the law and ensure it’s fully enforced,” said Vince Cinches, Greenpeace Philippines Oceans Campaigner. “If we want the Philippine tuna industry to have a future, we should only allow fishing capacity that does not deplete fishing grounds, and ensure fair and sustainable fishing for both small-scale and commercial fisheries. The government should also provide much needed protection for tuna spawning grounds within Philippines waters. ”

Greenpeace and fisherfolk are demanding that the Bureau of Fisheries and Aquatic Resources (BFAR) urgently reduce the number of purse seiners, to align with sustainable catch levels and allow overfished bigeye and other tuna stocks to recover. To tackle bycatch of juvenile bigeye and yellowfin tuna, the BFAR must also ban the use of fish aggregating devices (FADS) by vessels using unselective fishing gears such as purse seine nets, and create a fisheries administrative order that prevents the catching, landing and selling of juvenile tuna. Together, these measures present an effective strategy to conserve the dwindling tuna stocks.