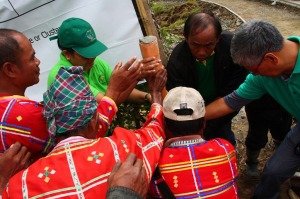 DAVAO CITY – Finally, an agreement between the Indigenous Peoples (IPs) group and the Department of Agriculture (DA) 11 was done through a symbolic ritual recently at the Marilog Stock Farm and Research Center Reservation in Marilog, Davao City.

Through benchmarking of the different points, DA 11 once again re-survey in conformity with their customs and traditions the parcel of land with the help of the IPs assuring that they have fully trusted the land to the agency.

Under the Presidential Proclamation No. 589 by then president Fidel V. Ramos, the 514 hectare land was declared as civil reservation for stock farm and research center site of DA 11.

“I am happy that it was all put to the end. With this benchmarking, we thanked the Matigsalog and Obu-Manuvu tribe for entrusting us the land and for finally reaching to an agreement,” DA 11 Director Remelyn Recoter stressed.

The director added that the IPs (represented by six clans) will be the farmer cooperators of the land and the first to benefit whatever the program that will be bought by the agency to the area.

“They will benefit on the technology that will be brought by DA here and our agreements involved trainings, activities and education in terms of enhancing their skills in farming,” Recoter explained.

Recoter emphasized that the agency followed the Indigenous Peoples’ Rights Act (IPRA) through recognizing the ancestral land rights of the indigenous people.

This law also creates the National Commission on Indigenous Peoples (NCIP) an office under the Office of the President and shall be the primary government agency responsible for the formulation and implementation of policies, plans and programs to recognize, protect and promote the rights of Indigenous Cultural

Assistant Regional Director for Research and Regulatory Dr. Rafael Mercado said that whatever problems they encountered before has been put to an end and they hoped that the laid markers shall serve as blueprints for a harmonious working relationship.

“This is a chapter that we would like to close for the development of the stock farm and we are positive that everything will be okay. Rest assured that the IPs can benefit in this endeavor,” Mercado bared.

As to the utilization of the land, Mercado said that agro-forestry areas were soon to be developed and the research facility is about 200 hectares.

About 100 hectares was also allotted for livestock and  100 hectares for goat raising, which includes the construction of goat shed that can house good breeds and quality goats.

About 50 hectares was also utilized for the rubber project wherein IPs was trained and was given seedlings for them to start in their own.

Meanwhile, officer-in-charge Benjamin Pagong said that the ritual is a manifestation that there is peace and unity among the agency and the IPs.

Pagong also bared that currently, the stock farm has 37 heads of cow, 11 heads of horse, 11 heads of organic farming pig and 11 heads from the normal program in livestock.

He said that the animals raised in the stock farm will be distributed to the farmers in need of livelihood assistance.

Matigsalog tribe representative Datu Manuel Lawingan Sr. clarified that they are fully confident that DA 11 will take care of the land.

He added that they wanted to be assured that they will be the first to benefit whatever programs and technology introduced by the agriculture sector in the area.

“Kung dunay panarbaho kinahanglan ang unang hatagan ang clan holder (if there will be available jobs in the area make sure that the first to benefit are the clan holders),” Lawingan stressed.

He also said that they are thankful to the agency for the trainings conducted especially in improving their skills in farming. (Aggie Media Service) 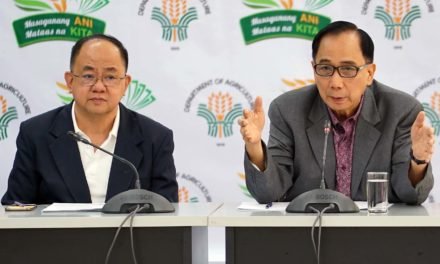