The Department of Agrarian Reform (DAR) recently turned over a 2.4-kilometer farm-to market road amounting to Php14.5-million in Barangay Casoroy to Sitio Layog. San Julian, Eastern Samar, which would make travelling to and from the town proper less burdensome.

More than 1,000 residents, including 72 agrarian reform beneficiaries (ARBs), will directly benefit from the project.

DAR Regional Director Sheila Enciso said that the project was jointly funded by the Asian Development Bank (ADB) under the second phase of the Agrarian Reform Communities Project (ARCP-2) and the Local Government of San Julian contributing 50 percent of the total project cost.

Enciso added that the government is expecting farmers to produce more, increase their income and contribute to food security in the country.

San Julian Mayor Ezekiel Fritz Aseo said the project is of great help to the farmers. He added that it took residents hours to travel going out of their barangay using a paddled banca through a narrow creek due to the poor condition of the road. With the completion of this project, it takes one to travel to and from the town proper in just a couple of minutes,

Bernie Colico, farmer-leader in the area, disclosed that many residents resettled in another barangay due to the inaccessibility of their barangay. Now, they are planning to return and make their farmlands productive once again. (jose alsmith l. soria) 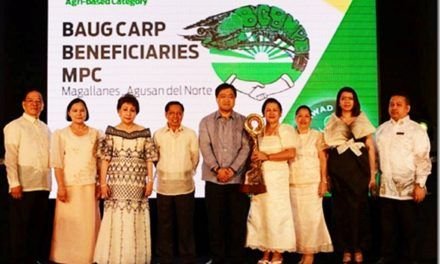