Barangay leaders from all over Los Baños, Laguna got acquainte last Thursday, August 13, with an information management system that could help them make better decisions for their constituents.

The Community-Based Monitoring System (CBMS) was introduced recently to the village officials at the Techno Forum organized by the Los Baños Science Community Foundation, Inc. (LBSCFI) as part of its celebration of this year’s Los Baños Science Festival, otherwise known as “Syensaya”.

The CBMS was introduced to the Philippines as a way to measure how the country, at the village level, is meeting its commitment to the United Nations’ Millennium Development Goals (MDGs). The MDGs are the world’s time-bound and quantified targets for eradicating extreme poverty in all its forms – lack of income, hunger, disease, inadequate shelter and exclusion – while promoting gender equality, education and environmental sustainability. Resource person Ms. Ma. Melita Villaruel, CBMS Authorized Resource Speaker and Municipal Local Government Operations Officer, Department of Interior and Local Government (DILG) said the CBMS requires that data from the barangays as there is a dearth of reliable information from the community level.

“What we have a lot of,” she said, “are estimates at the national, regional and provincial levels, but none from the communities. Without data that have been collected from every household in the barangay, we don’t have any basis for the decisions we make. We do not know whether or not we are hitting our project targets.” Meanwhile, panelist Mr. Medel Salazar shared how the CBMS output became the primary source of data for various projects conducted by the Provincial Government of Batangas.

“Some of our projects that made use of CBMS output include those on housing, provision of toilets, OFW assistance, irrigation, distribution of Philhealth cards, electrification, and relocating informal settlers. We also gave relevant CBMS information to our schools, engineers, veterinarians, social welfare people, as well as our other provincial government offices.”

Speaking on behalf of the participants, Barangay Captain Janos Lapis acknowledged the importance of trustworthy data in decision-making, and said Los Banos villages could use more funding to develop effective information systems. 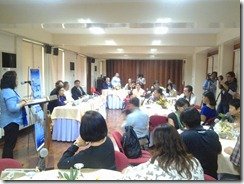