OFFICE OF THE SECRETARY

Project NOAH is one of the Research and Development (R&D) Projects funded by DOST as part of its Disaster Risk Reduction R&D Program. It Started in 2011 and most component projects were completed in 2015. It was extended in 2016 to cover additional targets and deliverables. It has delivered very useful technologies as part of its research outcomes and these technologies have been put to use. The extension was given up to end of February 2017 and part of the condition was the transfer of the technologies for use in operations in the government agency that would take over the operations aspect of the delivered outputs/technologies. It is timely that the PAGASA Modernization Law has been approved.Details of the turnover were discussed among DOST officials, PAGASA officials and Dr. Lagmay in late 2016.

It has to be understood that Research Projects have start and end dates. In this particular project, the promised deliverables have been met and now ready for adoption and use. However, if the researchers has a new project proposal in a related area, it can be submitted, evaluated and considered for funding. It has been made clear by the previous administration at DOST that the project as a research activity has reached its completion and project ending date.

The statement of no funds is for the current project which really has a project end date. It has been stated clearly that new project proposals are welcome if there is a new study to be made.

A new project would mean project name. The outcomes or results of Project NOAH is now due for use and adoption, specifically by PAGASA. Its adoption by PAGASA ensures the NOAH tools to be institutionalized.

The project has delivered what it has promised to deliver. the results are useful and should be institutionalized in regular government agencies whose mandates cover these areas. 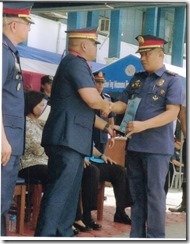